As you walk into the Imperial (located at 2001 18th St NW at that awkward intersection of Florida, U, and 18th Streets NW) you’re immediately transported out of the grit of Adams Morgan and into something not dissimilar to the final scene in “2001: A Space Odyssey” (but a lot less creepy, and a lot more friendly). The gleaming white lights and furniture make you just want to stand up a little bit taller in your beautiful teak-wood seats. Sitting at the bar, I just didn’t know which way to look… at the gorgeously colored teal tiling work behind the bar, or the opposite direction for some people-watching out of the expansive windows onto 18th St NW. Gorgeous space, but do the cocktails hold up?

Obviously I wanted to try every drink on the menu, but it was also Dram & Grain’s soft-opening night… and I had arrived there just a hair too late to get seated! So head over to Imperial for my first libation of the night. The Vert-ical Integration catches my eye under the “Cobblered” section of drinks. Think of the cocktail as an upscale cucumber cooler. All of the key ingredients are there to chill your core temperature when you’re running hot, but there’s so much more going on. The aloe liqueur takes the fresh flavors to another level. But what really makes the drink sing are the herbal flavors from all the other ingredients. They’re subtle but they’re there. As you sip on this one, I recommend you do it with your eyes closed. Try to discern all the other flavors, and you just might find something different with every sip! Also kudos on the julep glass, and BIG KUDOS to the straw that doubles as a spoon. It’s a subtle and cool touch that shows thoughtfulness in the barware selection.

So here’s the dilemma: do I continue exploring the Imperial menu, or do I chance it again at Dram & Grain? Just like some of my favorite Jeopardy contestants, I go for the “True Daily Double” and try my luck. Dram & Grain was formerly located in the basement of nearby Jack Rose (also owned by King and Thomas). I actually went there on the night I proposed to my wife, so I was eager to see what the new space would be like. D&G has since re-opened in the same building as Imperial (the entrance is an unmarked doorway a few steps north on 18th St).

D&G is a perfectly moody companion to Imperial’s glow and vigor. There’s a quiet buzz about it, and all the patrons clearly looks excited to be there on opening night. The dimly lit bar-front and table areas are completely full. Luckily I’m led to another room which kind of feels too bright compared to the rest of the place. Nonetheless, I’m very excited to see the menu which has three categories of cocktails (though I assume these categories change often): “Baked Citrus Amaro”, “Tamaro”, and “Anisette”. I’ll save you the descriptions, but rest assured they’re elaborate and intriguing.

I went with an Anisette drink because I love all things anise flavor (Absinthe, black licorice, fennel, caraway, etc). The Cavalletta is creamy, minty, and full of that anise flavor I was so craving. Milk-washing is a process which can mellow out even the harshest of spirits (which anything with the name “Branca” can be if you’re not used to bitter Italian Amari). It’s a brilliant technique to tame an unruly beast. The cocktail is accompanied by an almond-flavored pizzelle, which is normally flavored with anise but almond is a good flavor-pairing with the drink.

Well, the plan was to get a drink or two and head out, but it’s like they knew my kryptonite was foie gras (and a mousse at that!). The dish is an absolutely perfect balance of the velvety umami of foie gras. The acidity of the pickled gooseberries that cuts the richness, and the fig puree which adds a little sweetness to round it out.

It’s impressive enough to open one great cocktail bar in DC, but to open two within a week is more than doubly impressive. I especially look forward to the innovation that D&G will continue to bring to the cocktails scene in DC. Between Jack Rose, the new Imperial, and Dram & Grain the King and Thomas team have pretty much locked down lower AdMo. Northeast has its Dave Thomas Circle… so maybe we should rename that awkward intersection in AdMo to “King and Thomas” Circle. 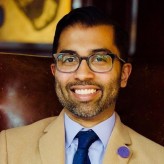 This site uses Akismet to reduce spam. Learn how your comment data is processed.

Not To Be Missed

The DCFashion 5 Great Places to Shop for Men

Best Spots for Tequila in DC